A handheld or folding fan combines function, ceremony and decorative beauty all in one. When waved back and forth they create a cooling airflow. For centuries they were a status symbol, and later used by ladies to convey a mirid of different coded messages.  The decoration, detail, workmanship and material add another layer to their appeal.  Whilst the fan is no longer the ‘must-have’ accessory of previous times, they are still used today, often as advertisements, to commemorate different events or as souvenirs.

Wendy Whitlam collects fans because they are beautiful objects. Her favourites are the folding kind since many feature lovely leaves. They are usually made from paper or a fabric like cotton or satin, but also lace or even feathers. Her favourite fans have floral themes since she loves flowers. The beautiful boxes and pouches the fans come in adds to their appeal.

Wendy’s first two fans were given to her when she was a child, but she didn’t start collecting them herself until she began travelling overseas for work. She has not tried to build a representative collection by period, country or style, but instead chooses fans if they are different or quirky, and largely collects them based on what she likes. 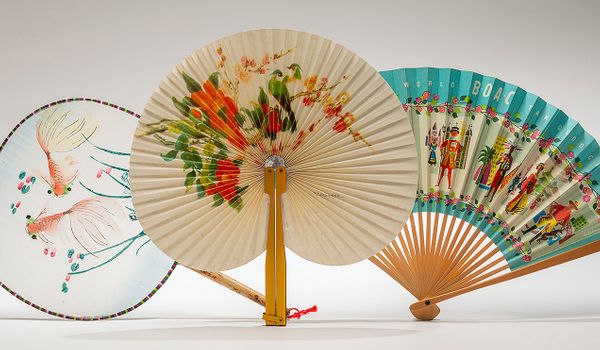