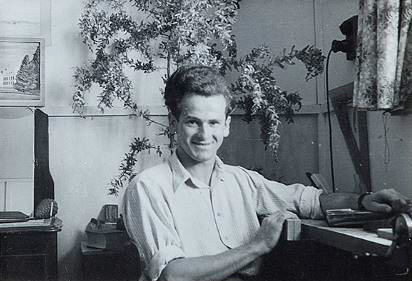 I was born on June 7th of 1927 in Ostelsheim, a village near the town of Calw in  Baden-Württemberg, Germany. It is in a lovely position on the North-East corner of the Black Forest and when I was young was still a farming village of about 500 people.

My mother had seven children and was an excellent cook and manager. My father, the village cabinet maker, provided the village’s joinery needs from cradle to coffin. Father and Mother, with the help of us kids, worked hard to purchase some land to sustain us over the hard times, particularly given the physical and social climate of Europe.

At home we never starved. All of us studied at the Volksschule in the village over 8 years. The Second World War took my older brother’s life early. He was the joiner destined to take over the workshop. This meant I was now in line to learn joinery instead of becoming a teacher or a mechanic, which was my main interest.

At the age of sixteen and a half I had to join the Arbeits-Dienst and was stationed for three months  near Kladno in Checkoslovakia. Then three months on, I was part of the “FLAK” battery in Augsburg, Kriegs Haber. After my 17th birthday I was trained as a paratrooper near Gardelegen, at Witstock on the Dosse near Berlin. I never jumped from a plane because there were none available at that stage and fuel supplies were short. After a short stay at Lisse, Holland, my unit was posted to the front line of the Battle of the Bulge at its start in early December 1944.

Both sides were bombarding each other’s positions over where we sat. We advanced from our position at least 50 or 60 kilometres west. On Christmas day of 1944 at 5:30pm an allied tank blew our log-shelter to smithereens.  About 10 or 11 of us teenaged soldiers had to run in 40 to 50 cm deep snow in about minus 10 degree temperatures in order to find some cover. After a while and constant strafing with tracer bullets the tank driver must have assumed he had all of us and moved on looking for other targets.

A broken down German or stuck ambulance was parked about 250 metres away. The allied tank destroyed it and under the cover of the smoke one of my companions and I were able to crawl for safety in the forest  further up the slope. I only lost 2 knuckles on my left hand when I was shot. My companion, Paul from Hamburg had dozens of splinters in his back. I think the others would have died or been frozen stiff by the next morning.

After a long walk back along the river Mosel, to the Rhein, I got picked up and taken to the military hospital in Limburg on the Lahn. After recovery I was given a short home stay. While I was at home an allied bomber coming back from Stuttgart was shot down over our village. We watched the aerial fight which happened at about 1am. We buried  6 or 7 Canadian crew members in a good spot in our town cemetery at the suggestion of the town Mayor and the local Lutheran Minister. I took photos of the ceremony, which allegedly helped the treatment of our village after the war when we were occupied by the allies.

Then I was sent straight back into action at the American bridge head of Remagen. After this engagement  I ended up as a P.O.W. and transported to a camp called La Fleche between Le Mans and Tours in France. La Fleche was run by the Americans but after 3 months was handed over to France as a work camp. Then all the under 18 soldiers and officers were transported to a camp called “Chef du Pont” near Cherbourg.  I turned 18 in the camp and because I had turned 18 I was allowed to do some work for extra food. I was there about 4 months and was discharged in November 1945. We were sent by goods train to near Heidelberg in Germany and discharged. It took me two days to walk home and I arrived after 1am. It was a big surprise for my family  as they had not even heard whether I had survived the second time on the front. The home comfort didn’t last for very long because the French Occupation Forces called me in to work for them at Herrenalb for three months. First I worked on a stonecrusher and then I worked in the forest cutting timber. My village of Ostelsheim was short of help too.

In 1946 I completed my cabinetmaking apprenticeship. In 1947 I was awarded a scholarship to study interior architecture in the Academy of Fine Arts in Stuttgart. This scholarship did not cover my accommodation and living away from home expenses, only fees, so I had to fend for myself and they were very hard years of my life as I was constantly working. My landlady was a very generous Aunty of my girlfriend, I had a room at Lenzhalde 42, her villa in Stuttgart. One night at dinner she pointed out an article in the newspaper which was titled “Der Weg steht ihnen Offen” (The way stands open for you.) AV Jennings, a building firm in Canberra, Australia, wanted 150 carpenters and Joiners! As I had just finished my sixth semester and did not want to start in an office, I took the chance and applied. After a successful application and acceptance, here I am.

To explain how and why I made this important move in my life, would be a bit difficult in a short summary... to explain why a young man or woman would leave a pretty birthplace with plenty of work on offer.
1. To find out what other people do and think!
2. To escape a lifestyle which, up to then, was regimented, restricted and within shrinking borders.
3. In search of an open and free lifestyle, where past and present were not clashing.
4. LOVE – hard to explain.
5. The search to be free in wide and open spaces.
6. Not to have to live up to somebody else’s level.
7. And to show that you can make your own decisions.

The farewell from loved ones was easy. Even though I was going to the other end of the World, it was only for two years.  I didn’t tell anybody until I was fully accepted. The boat left from Bremen Lesum. We, a group of 12 selected workers, boarded the first transport, the Skaubryn. The ship was transporting displaced persons from WW2 and we had two cabins booked. My first overseas trip carried us, without leaving the boat, in five weeks, to Port Melbourne.

We disembarked in Melbourne in the morning  and were flown with TAA or ANA to Canberra in the afternoon. We were taken to Capital Hill Hostel, our accommodation. The hostel supplied shelter and food. Its costs were deducted from our weekly wages, as was our boat fare. We payed taxes from the first day we started work. Australia was a country of contrasts for us Europeans in the climate, the way people lived and how they dressed. Houses were painted more colourfully and the clothes that the women wore were bright and cheerful compared to the black and grey worn back home.

On the building site, soon we learned to use a “f***ing 4” nail” in the Australian language. Along with  “f***ing Hardwood”, with a strange “f***ing claw hammer” in “F***ing 4x3, 4x2, 6x2 and 8x2”. We had to learn to convert our decimal education into imperial measures. To learn a new language on a building site, did lead to some problems in society, especially when dozens of German speaking workers lived under the same roof.

These hurdles were also jumped after our contracts were completed and many were dispersed all over Australia. A large number stayed in and near Canberra as there was plenty of work in building and cheap land available. After trying some of my hobbies and talents I came to the conclusion that designing and building houses would be a good way to earn a living.

Some of the Germans, in and around Canberra, started the now established “Harmonie German Club”. I am life member number 7. My building trade also changed my, up to then, busy bachelor life. I noticed in The Canberra Times ads that the War Service Homes wanted a builder for a small home extension to a two bedroom cottage. One evening I knocked on the door of number 74 and a nice lady answered the door. My prepared speech was, “I am Albert Schneider and I’m your builder and want to start work next week.” I was this lady’s builder for 53 years and she is still in my present happy memories.

Before our wedding in 1958 I was granted Australian Citizenship. Her family history went way back to Cornwall near Truro in England. I was suddenly part of a large and friendly family because Joy had three sisters in Canberra, each with families of five children or more. I developed asthma, from dust collected over the years in workshops and on building sites. All my activities with concrete, wood and brick became a hobby when I was offered and accepted a job with the Department of Interior as a building inspector.  At the age of 56, having been an inspector for 14 years I retired at a modest superannuation. Joy and I spent over twenty happy and fruitful years on our bush property of over 220 acres in “The Mullion”, a beautiful, fine wool growing community between Canberra and Wee Jasper. We enjoyed being part of the community. We came to the point where we couldn’t manage the property any more and had to leave. Old age caught up. Joy found a lovely spot with a view at the lawn cemetery 8 years ago. I will be moving in there soon too.