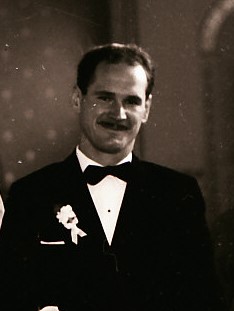 Born in Berlin on 19 April 1927, and educated there. Following schooling, he pursued a course in cabinet-making and joinery, completing an apprenticeship in 1947. He worked in various furniture factories in Germany before joining, in 1950, a prominent firm in Munich. From Munich he emigrated to Australia, coming to Canberra under contract to work with the building company of AV Jennings for two years. At the end of this contract he joined the ANU.

Kurt Kloska was appointed a Laboratory Craftsman at the Research School of Physical Sciences, and commenced work on 21 June 1954. In the new university his duties involved a wide range of cabinet-making, carpentry and construction tasks, helping to build a science research school with a primary experimental purpose. He was promoted to Senior Laboratory Craftsman, and after nearly 20 years of service at RSPhysS transferred to the Research School of Earth Sciences when it was formed in 1973. As the sole wood-working expert in RSES he was now continuously in demand for an even wider range of tasks, ranging from furnishing director's offices to building frames for scientific instruments. All work was done beautifully, with a great care for detail. Quite recently, he obtained satisfaction from the reclassification of his position to one of Senior Technical Officer.

His craft was also practised as an art form, in the pieces he made of wood inlay. An earlier Reporter carried an article on his inlay work Erasmus of Rotterdam, remarking on its rich colours and soft appeal. At RSES his pride in his work and the very high level of its finish set a standard right across the School, and contributed to the feeling amongst RSES people that it was a place to be proud of.

A sociable man, Kurt Kloska loved a joke and company, and held dear the traditions of good fellowship of the German beer-hall, as exemplified in the celebration of the Oktoberfest. In Canberra he had a number of circles of friends, prominent amongst them the 'Jennings Germans' with whom he had emigrated, and other members of the Harmonie German Club. At the university he enjoyed the company at the Staff Centre, and at RSES he was a popular figure at barbecues, helping with the cooking. This year, on his 64th birthday, he was host at a party held in the RSES Workshop, much enjoyed by the wide range of RSES people present.

Kurt Kloska was rightly proud of his family. His marriage to his wife Hilda (now of the Department of Statistics, the Faculties) took place on 3 December 1955, and he had himself built the house in Ainslie, where they made their home. Their two sons, Kurt jnr and Peter were brought up there. Kurt (senior) was always pleased to talk about some aspect of the house and garden, and it gave him great delight to see his sons grow up into young men.

Kurt Kloska was also very proud of Australia, his adopted country, and this pride extended to a fine appreciation of the natural Australian timbers. He transferred direct to Canberra some of the skills and artistry of the best European wood-working craftsmanship. In 1984, in appreciation of his 30 years of service, the university awarded him a medal.

His funeral service was held on 4 October at St Christopher's Cathedral, Manuka, the church where he had been married. It was well attended by his circle of friends, all of whom held him in high regard.