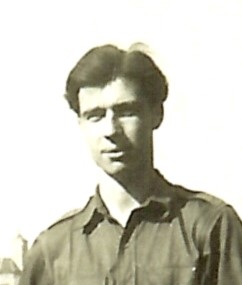 Guenther Manfred (Fred) Weber was born in Jena on the 18th of June 1928. He attended school in Breslau until he was pulled out to serve as a Luftwaffen helper in the flak towers in Breslau. In May 1945 he was interred in a Russian POW camp and released in August 1945 as conscripted labour to rebuild vital services.

He escaped East Berlin to arrive in Vaihingen Enz as a refugee in May 1946, living in refugee barracks until reunited with family by Red Cross tracing. It was in Vaihingen he met Edith Mina Moedinger, his future wife.

Between 1946 - 1951 he undertook an apprenticeship and employment as a carpenter and joiner. When AV Jennings Construction Company advertised for carpenter-joiners to apply for a two-year working contract in Australia he applied, passing the trade test in July 1951.

Holding no hope of returning to an intact family or home in the East, the lure of better wages, freedom to explore vast spaces without restriction and leaving behind memories of death and destruction became the driving force for his departure, and also explained his passion for democracy.  He never returned to visit his homeland.

On the 8th October 1951 he boarded the Skaubryn for the six-week journey to Australia, and on arrival in Canberra worked on the AV Jennings homes.  He sent a diamond engagement ring to Edith in Germany, and in January 1953 she boarded the Nelly for Australia on an assisted £10 passage with a two-year contract as a domestic worker.

He married Edith on the 11th of May 1953. They had two children, Sylvia and Ron.

After sharing a house with another couple they moved into their own house in Deakin in May 1954. In October 1954 to save rent they swapped the Government House in Deakin rented at £1.12 shillings for a cheaper fibro house in Narrabundah with rent of only 14 shillings.

Eventually he and Edith purchased a block of land in Narrabundah and over numerous years cleared the rocky block and slowly built the house. They moved into the house in 1965 and lived in it until their deaths.

Having had his education interrupted by the war Fred was passionate about furthering his education and attended TAFE for many years, winning prizes for General Building courses. He successfully completed certificates in  Civil Engineering, Building Foreman, Clerk of Works, Scaffolding and Lifts, Explosives, Spanish, Local Government Administration and Law, Powers and Duties of a Building Inspector, Building Practice and Regulations, Report and Specification Writing.

His career evolved from carpentry/joinery into multistorey brick, steel frame and reinforced concrete buildings as Construction Foreman, and later contract managing the manufacture and supply of reinforcing steel. From 1974 till his death in 1996 he was employed with Scott and Furphy Engineers as Clerk of Works on the supervision of civil engineering works - mostly roads, hydraulics and associated structures.

He loved working with wood and enjoyed crafting bespoke items for his children and grandchildren. My fondest memory is of going into his garage to watch him working and smelling the sawdust. Besides his passion for his family and woodworking, he loved travelling and camping around Australia.