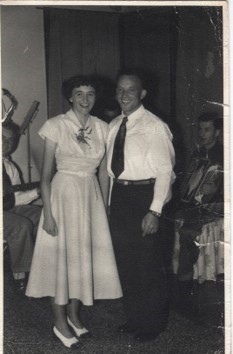 His father was a coppersmith by trade and worked for the railway repair shop in Munich. In those days there was a big demand for such a trade, especially from the railways, as all steam engine vital parts were made from copper or brass. He learnt his trade as an apprentice to his uncle at the beginning of the new century, and it was just at that time that the new Rathaus Town Hall was being built on the Marienplatz in Munich. His uncle had part of the contract to make and install the world famous 'Glockenspiel' in the tower. Where every day at noon and again at five in the evening the medieval Knights rotate on their duel ride on the upper platform, followed on the lower tier by the Cooper's Guild figures performing the Schäfflertanz Barrel maker's dance, part of Munich’s legend.

Since copper was the material used in creating and making the characters, his father, then working as apprentice learning his trade, was quite closely involved in the installation of what has become a tourist attraction now known all over the world. He later told Max that when the job was finished and the machinery was switched on for the first trial they discovered the knights were just a wee bit too tall to go through the arches so they all had to be dismantled and made shorter.

In 1940 at the age of 18 Max started his compulsory military service in the Wehrmacht serving five turbulent years before finally surrendering to the Americans late April 1945 and being interned in the notorious Rheinberg prison camp and then sold to the French as a prisoner of war to work in the salt mines for five years after the war had finished.

After Max was eventually released he returned to Germany. His mother had passed away while he was incarcerated as a prisoner of war. His brother was killed in one of the last pockets of resistance in Poland five days after the war had officially finished.

In the early 1950’s there was an ad in the trade paper from an Australian company, AV Jennings Constructions. They were looking for skilled tradesmen to move to Canberra to assist with residential construction. Max applied and was soon on his way to Australia with 149 other German men, eager to learn English and to start a new life following the destruction of World War Two. They were known as the 'Jennings Germans' and their modest, solidly built homes still exist today, an enduring link to a remarkable time in Canberra’s history.

While in Canberra Max met Jean Hunt, a ten-pound pom as they were called. They were married on the 11th September 1954 at St Johns Church in Reid. They were recognized as being the first migrant couple to exchange vows at St John’s and their story also made it to the Canberra Times.

Jean and Max went on to have 4 children, Maximillian (Max), Nikolaus (Nik), Janine and Mark. They remained in Canberra, keeping their links with the Jennings Germans. Max purchased some land on the South Coast at Tuross Head in the early 1960’s where he designed and built his dream holiday home in the traditional Bavarian Chalet design.

Max and Jean were married happily for 46 years when sadly Max passed away in August 2000 at the age of 78. Jean remained in the family home at Yarralumla supported by her 4 children and 8 grandchildren. Sadly Jean also passed away in October 2008. Both Max and Jean are missed by their family, they are fondly remembered and loved.