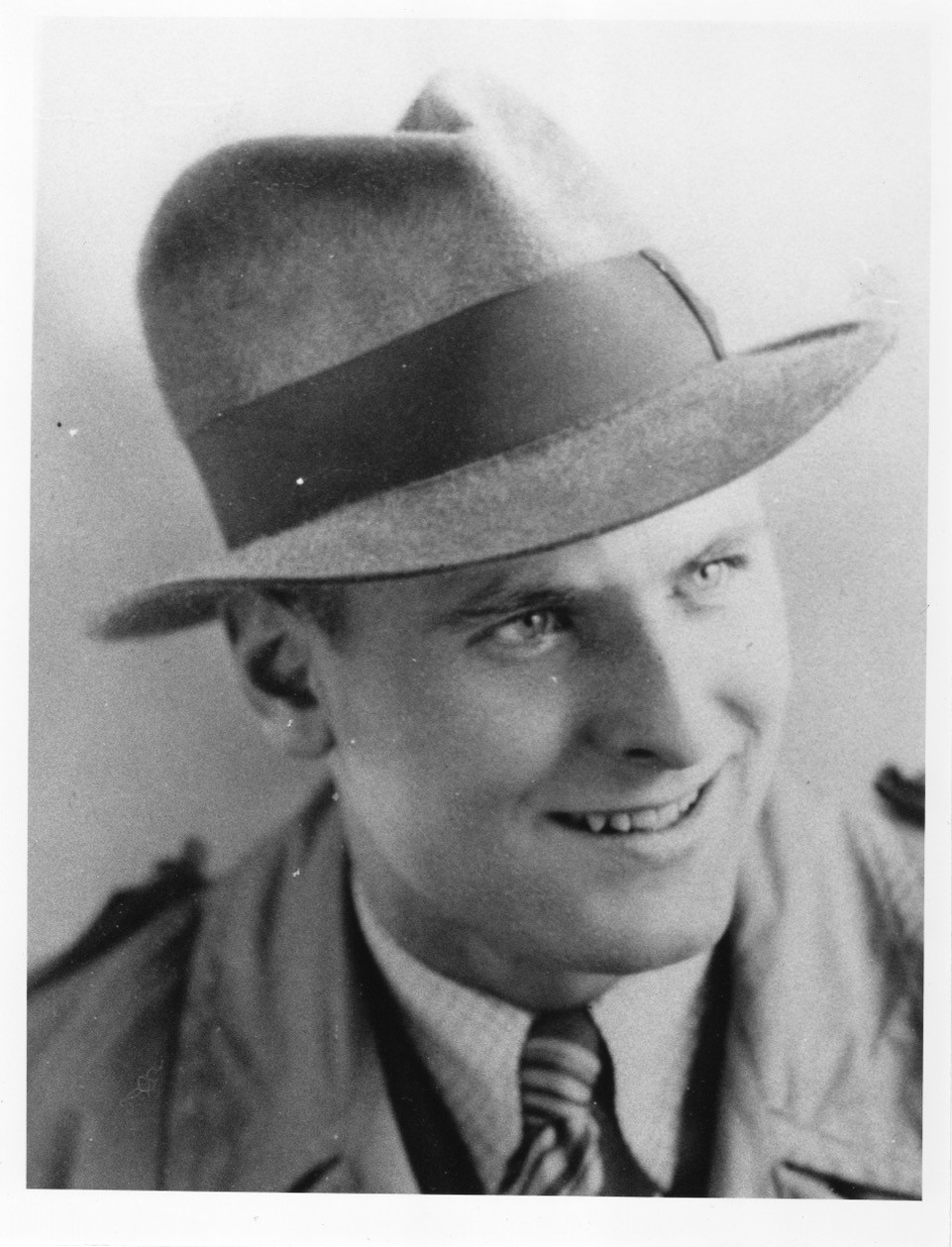 Walter Schäuble was born in the small town of Wolfach in the Schwarzwald (Black Forest) on 11 September 1917. His father, Johannes, would rise to local prominence as a lawyer and senior public servant in the Baden provincial government.

Walter spent his early years in Wolfach and was later educated in Karlsruhe. During the 1930s, political pressures on his staunchly Catholic family during the rise of National Socialism played a large part in his decision – encouraged by his father – to leave Germany. His involvement in the Catholic Youth Movement and refusal to join the Hitler Youth meant that he was barred entry to any German university.  After working briefly in Leipzig, he left Germany in January 1938 for England.

There Walter trained and worked as a furrier with the London firm of P.R. Poland before leaving for Australia in May 1939. Aged just 21, he arrived in Melbourne on 5 June 1939 aboard the MSS Maloja, three months before the outbreak of war. While in London, he had already secured employment with the firm of Marks and Saulwick Pty Ltd, fur traders. His entry to Australia was sponsored by prominent Melbourne barrister and civil libertarian Eugene Gorman KC.

As a fur and leather classer, his work was deemed a restricted occupation as much of this material was used in the manufacture of military apparel and supplies for the war effort. While many of his co-workers left to enlist in the armed forces, Walter was able to remain employed. Officially classified as a refugee, he avoided internment as an enemy alien during the war – the fate of so many Germans and their descendants.

He remained with Marks and Saulwick until 1944. He also remained under surveillance throughout the war by the Commonwealth Investigation Branch, which reported favourably upon his progress, noted that he was “obliged to leave Germany on account of his religious beliefs” and found no reason to object to his later application for citizenship in early 1945.

In 1942, Walter married Barbara Jackson, the New Zealand born daughter of a prominent Melbourne businessman. They would eventually raise a family of seven sons. Walter was naturalised as an Australian citizen in 1946.

Around this time, he became engaged in a variety of commercial pursuits. In 1947 he also began his professional career as a journalist, becoming a correspondent for a number of German trade magazines.

From June 1950, Walter Schäuble was central to recruitment of the 150 tradesmen who would become known as the 'Jennings Germans'. On 8 June 1951, leaving behind his wife and four young boys, he travelled to Freiburg with Alan Jack, head teacher of building trades at Canberra Technical College,  to begin the process of advertising for and choosing those who would come to Canberra to help build new homes in the young capital.

The very first tests occurred in Karlsruhe, where only one applicant was successful. The recruiters eventually moved on from Freiburg to Munich. The whole process was supposed to take three months, but ended up taking closer to six, with more than 2000 applicants being whittled down to 500 and eventually to 150.

Alan Jack was responsible for testing the trade skills of the applicants. Meanwhile, Walter navigated the German and Australian bureaucracies and was responsible for ensuring the young men were of good character, in good health and without political (Nazi or Communist) connections or criminal convictions.

Upon return to Australia, Walter continued to work with AV Jennings to help smooth the transition of the young migrants into their new country. He remained with the firm for over two years until November 1952. Interestingly, he maintained a lifelong friendship with the company’s founder, Sir Albert Jennings. He also maintained a connection with the Jennings Germans for the remainder of his life, attending their first reunion in Canberra in 1965, and later reunions in 1972 and 1977.

But his career moved in different directions. One of these was the broadcast media. Having undertaken training in radio journalism in Europe, he became the Australia-Pacific correspondent for the South-West German Broadcasting Network (Südwestfunk). In 1956, he was an accredited correspondent for German broadcasting at the Melbourne Olympics. Over the next 20 years, he made thousands of broadcasts for Südwestfunk, Westdeutscher Rundfunk (WDR Köln) and Deutsche Welle. He also made a number of radio and television documentaries and was attached for two years to the Australian Broadcasting Commission transcription service.

Maintaining connections with the German community in Victoria, Walter hosted the weekly program ‘International Musicale’ on Melbourne radio station 3XY from 1966 to 1968 and a weekly program in German and English to country Victoria from 1968 to 1975 on the Associated Broadcasting Network.

But it is as a pioneer of ethnic broadcasting in Australia that Walter Schäuble is perhaps best remembered. He was among the original foreign language broadcasters on radio station 3ZZ in Melbourne. He is also credited as the “founding father” of radio station 3EA in 1975, where he was both assistant manager and broadcaster. His programs – both music and current affairs – were originally heard in both Melbourne (on 3EA) and Sydney (on 2EA). He nurtured a legion of devoted listeners. The two stations formed the nucleus of the Special Broadcasting Service (SBS) founded in 1978, which expanded into television in 1979.

Away from the microphone, Walter remained active in German community affairs through the Australian-German Welfare Society and as chairman of the Migrant Settlement Council of Victoria.

In 1980, the Federal Republic of Germany recognised Walter Schäuble’s service to the German community in Australia by awarding him the Order of Merit (Verdienstkreuz 1 Klasse). In the same year, he received an MBE (Member of the British Empire) on the recommendation of the Australian Government for services to the migrant community, particularly in the field of ethnic broadcasting.

Walter Schäuble died in Melbourne after a short illness on 28 May 1985.